Thank you for giving this story a happy ending!

A while back, my Dad and Mom paid Lowes to put new siding on their home in Woodbury, N.J.

After my Dad died this year, my brother and I realized Lowes had failed to replace a structurally important part, something Lowes acknowledged when my uncle pointed it out on before and after photos.

Just a few minutes after this article was published, a Lowes representative called my uncle and said the repair would be made at no charge, “In the spirit of the season.”

From the time we moved there in 1958, Dad fixed pretty much every part of that house, from the shingles on the roof to the sump pump in the basement, and everything in between.

He had help from us kids.

He taught me how to hold a hammer, how to hit a nail on a shingle (“One to set it, one to sink it.”), how to care for a saw, how to strip a wire, how to glaze a window, how to measure a board (twice) and how to cut it (hold your mouth right), and how to treat a really good paint brush to make it last a lifetime. Without me noticing until after the fact, my Dad slipped in a whole lot of Science, Technology, Engineering and Math.

That experience – along with frequent calls home and a few house calls from Dad – helped me and my husband go on to rehab and remodel a series of homes in Dallas, Phoenix, San Francisco and San Antonio. My brother was able to leverage that guidance in “how to figure it out and how to fix it” into several decent jobs along the way.

But by 2011, when the outside of our family home needed a facelift, Dad couldn’t do it. He was 78. Cardiopulmonary disease was taking its toll, and he was tethered around the clock to an oxygen bottle.

In phone calls from my home in San Antonio, I helped my parents to get a series of bids, including one from Lowes, for new siding and new windows all around. With help from my friends at the San Antonio Express-News Federal Credit Union, we found the people-centric South Jersey Federal Credit Union for Mom and Dad to join and get a low-interest equity loan for the project.

Dad documented the work from day one, hoping to produce a time-lapse video of the project. It was the first time someone outside the family had worked on our home.

I remember almost to the minute when the Lowes contractor wrapped up the job. Dad told me on the phone how the workmen rushed all day Saturday, Oct. 29, 2011 to finish.

Superstorm Sandy was right off the East Coast, poised devastate parts of New Jersey and New York City. The killer hurricane made landfall in Brigantine, N.J. that night and looked at first as if it would take a straight shot over Mom and Dad’s house on its way to Philadelphia. (more about Sandy here)

In the end, the storm barely touched Woodbury, just giving the new siding and windows a gentle power wash.

When I went home to visit for Thanksgiving in 2012, I didn’t notice what Lowes contractors had failed to do: They removed and did not replace a brace that supported the side porch roof on Mom and Dad’s house.

And when I went home in May of 2013, I still didn’t notice the missing support brace under the porch roof. I was focused entirely on my Dad, who was fast going downhill. We went to the pharmacy where he introduced me to his girlfriends, who kept him smiling. We went to see the chiropractor whom he adored and we went to see his general practitioner, a man Dad counted as an intelligent friend. We drove to his beloved Jersey Pine Barrens for a last visit. We talked, hung out and hugged.

I went home again this year, and got to spend a precious couple days with Dad and my family before my father died on March 28.

When we came back to the house, my brother and I noticed something wrong. The storm door on the side porch wouldn’t open all the way, and the top of the door scrapes the ceiling under the porch roof.

That’s because the Lowes contractors failed to replace the support brace under the porch roof. And the porch roof is sagging because it needs that external support.

When he got home in Yakima, Washington, my brother made many calls to the Lowes store in Deptford, New Jersey. Over the course of the summer, he was told Lowes couldn’t do anything because he couldn’t prove the support brace ever existed.

My Dad’s younger brother, who lives about 20 miles away, took the handoff. He searched through all of Dad’s photos to find the one above that clearly shows the support brace existed – until it was removed by the Lowes contractor.

My uncle said the Lowes representative in the Deptford store, Joseph P. Konsanty, looked at the photo and agreed that their contractor had removed the support brace and that it should be replaced.

But Konsanty told my uncle the job would cost $500 and they want my Mom, who just had knee-replacement surgery, to pay half the cost, or $250.

Just a few minutes after this article was published, Konsanty called my uncle and said the repair would be done at no charge, “In the Spirit of the Season.”

Thank you Lowes, for a happy ending!

Joe Lucas was a gregarious iconoclast, an uncompromising defender of civil liberties and human rights and a passionate Atheist, preaching to all who would listen.

He was born on Jan. 19, 1933, to Anna Kathryn Thaidigsman and Joseph Biddle Lucas in the Riverside, New Jersey, home built in the 1890s by his German immigrant grandparents.

He was politically engaged to the very end, contributing to Texas gubernatorial candidate Wendy Davis, signing online petitions and joining the American Civil Liberties Union in championing whistle-blower Edward Snowden as a patriot.

Besides Snowden, his heroes were journalists, activists and artists. He loved muckraker Jack Anderson, writer Molly Ivins, columnist Jim Hightower  and commentator Bill Moyers. Before the folk singer’s death in 2014, he campaigned to have Pete Seeger nominated for the Nobel Peace Prize.

He delighted in building things from scratch, be it a model airplane, a catamaran, a culinary creation or a computer.

A voracious reader and collector of tools, music and recipes, he was philosophically opposed to filing systems, hierarchies and rules, with the exception of the rules of grammar.

A gathering in remembrance will be held May 24 from 1 p.m. to 5 p.m. at the Unitarian Universalist Church in Cherry Hill N.J. For more details, click here. Our family asks that donations in his memory be made to NOWCastSA or to the Humane Society of Central Washington.

Coming next: The Early Years; The Photographer, The Activist…

I struggle to write my Dad’s obit. And then I rewrite it. And rewrite it again. 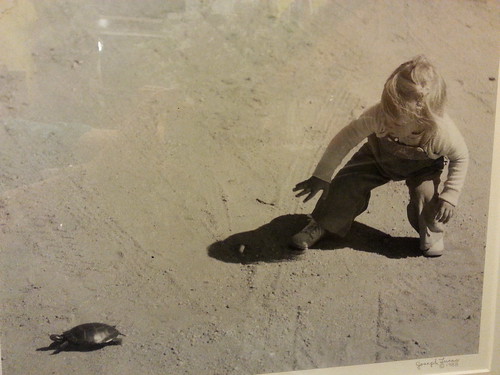 Charlotte-Anne and a turtle at Lake Oswego, 1956. Photo by Joseph Lucas

Where in the world to start?

My Dad taught me to read before I entered Kindergarden, he taught me to be a photographer, how to build and fly radio control model airplanes, how to fish, how to paddle a canoe and how to rebuild the engine in a car.

Most of all, he taught me how to think, and he stoked my passion for social justice. For my 14th birthday on Nov. 15, 1969, he granted my wish by taking me to Washington, D.C. to march against the War in Vietnam.

Because I could, I sewed a gib sail for the catamaran he made from two canoes, I took him to lunch with Texas writer and iconoclast Molly Ivins, and I married a man who loved him and liked talking to him.

There are facts, but there are no longer hard and fast truths about our lives ~ the truth and meaning are fluid, evolving.

I understand this a little better now, thanks to a generous and wise friend who pointed me to Robert A. Neimeyer, a psychologist who believes the central process in grieving is responding to the loss by reconstructing meaning.  (Book here: http://www.apa.org/pubs/books/431651A.aspx video here: http://youtu.be/xYS0W-Ulg4g)

So I will take the obit and the story of his life in bites, reconstructing the meaning in chapters. Starting with the facts and finding the truth as I go.

I love you Dad.